There is no single film director other then Swedish film director, Ingmar Bergman, who can stake this claim of fame: There are 3 (at least) of Bergman’s films to be reviewed here by me that I would not change one single film frame. The 3 films are what are referred to as “The Ingmar Bergman Trilogy,” and they are: THROUGH A GLASS DARKLY (1961), WINTER LIGHT (1963) and THE SILENCE (1963). The only way I can imagine reviewing these 3 masterpieces is to highlight one frame in each film. The island in THROUGH A GLASS DARKLY, the church in WINTER LIGHT, and the hotel in THE SILENCE, communicate our desperate need to communicate with one another and with God, the latter being what Bergman refers to as “God’s Silence.”

The single film frame of my choice for the island in THROUGH A GLASS DARKLY is this image:

For a film about the isolation of 4 lonely, failing-to-communicate people on an isolated island, it is this film frame of Karin, played by Harriet Andersson, in the upstairs wallpapered room that speaks volumes about this isolation. Karin is mentally ill and incurable from this, and she finds solace and meaning through a wallpapered wall that “gives way like foliage” for the eventual entrance of God. What transpires in this wallpapered room is something I know all too well, as it is exactly Karin’s emotional and physical state in this room that I stole from for my acting portrayal onstage of Iago in Shakespeare’s OTHELLO. When Iago makes a pact with the devil in the play, I copied Andersson’s emotional and physical state down to a “T” (as in “Timothy”). I love this film frame of Karin, because the inner communication of Karin to us viewers would go something like this: “Come with me as I meet God. Then, you will come to understand that God is NOT silent like this island. God is not about isolation or failing to communicate. God wants desperately to communicate with YOU!”

The single film frame of my choice for the church in WINTER LIGHT is this image:

Tomas Ericsson, played magnificently by Gunnar Björnstrand, is a clergyman in a crisis of faith. He is suffering terribly from a severe cold and throughout the film seems as sick physically as he is sick spiritually. I actually did a painting of this film image: 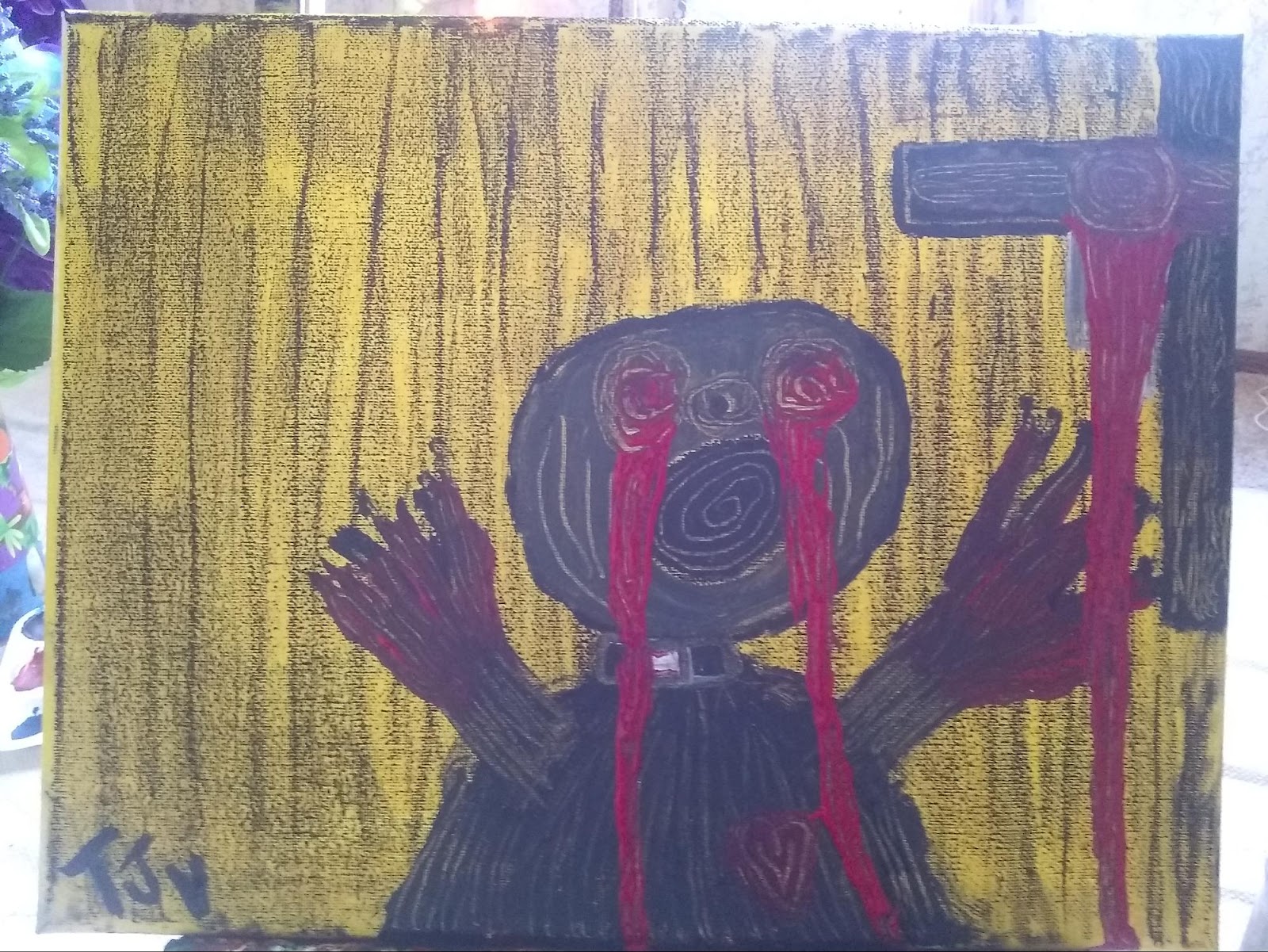 The church in this film is shot beautifully by cinematographer, Sven Nykvist, as shadowless and cold and lonely, but it’s this film image of Tomas at the Cross of Jesus that makes the church seem almost unnecessary. The church is relatively empty as far as attendants (“communicants,” as this was what Bergman deemed to initially call this film) but for Tomas, his sole and spiritual attendance inside (or outside) the church is all that is needed for him to meet up with God’s Silence at the Cross of Jesus. And for a “hand-man” such as myself, don’t think it’s lost on me the significance of that Nailed Hand of Jesus in this film image and the “peace sign” Jesus is giving Tomas….and us!

The single film frame of my choice for the hotel in THE SILENCE is this image:

I know this image is of Johan in a train and not in a hotel, but his hand (once again) on that glass window, an image Bergman returns to again and again, speaks of our desperate need to reach out (communicate) when our own words fail us. Bergman in this film has his 3-some (two women who are sisters and one of the sister’s boy, Johan) travelling to a land where the language is unknown to them. It comes down to their hands (and entire bodies) to solely (and only) communicate in a most desperate way. The hotel in the film actually makes this 3-some a 4-some, and the hotel’s magnitude of long, empty hallway corridors echoes the magnitude of our longing and emptiness as we walk down our own hallway corridors in the face of God’s Silence.

The island, the church, and the hotel are the settings of these 3 film masterpieces by the incomparable Ingmar Bergman. They set the stage for God’s Silence, for our desperate need to communicate with one another and with God beyond words. My choice to review these 3 Bergman films by one image is also not lost on me, as I choose not to change one image, BOTH the beauty images AND the pain images, of my life that is “like a breath; days are like a fleeting shadow” (Psalm 144:4). And for an Enneagram 4 such as myself, just look at all those 4’s in that Bible verse! 😉

NOTE: Remember when I mentioned at least 3 Ingmar Bergman film masterpieces that I wouldn’t change one single film frame? I can’t get away without mentioning 2 more Bergman masterpieces that actually are in my top 10 favorite films of all time: PERSONA (1966) which is #2 and CRIES AND WHISPERS (1972) which is #5.

I am a 54-year-old Christian. I am highly artistic and creative and enjoy acting, writing plays and poetry and short stories for children, as well as writing to promote nonhuman animal welfare. View all posts by Timothy J. Verret

2 thoughts on “THE ISLAND, THE CHURCH AND THE HOTEL”

This is a text widget. The Text Widget allows you to add text or HTML to your sidebar. You can use a text widget to display text, links, images, HTML, or a combination of these. Edit them in the Widget section of the Customizer.